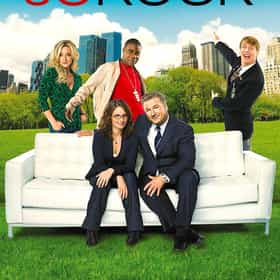 30 Rock is an American satirical television sitcom that ran on NBC from October 11, 2006, to January 31, 2013, and was created by Tina Fey. The series, which is loosely based on Fey's experiences as head writer for Saturday Night Live, takes place behind the scenes of a fictional live sketch comedy series depicted as airing on NBC. The series' name refers to 30 Rockefeller Plaza in New York City, the address of the GE Building, in which the NBC Studios are located. This series is produced by Broadway Video and Little Stranger, Inc., in association with NBCUniversal. 30 Rock episodes were produced in a single-camera setup, and were filmed in New York. The pilot episode premiered on ... more on Wikipedia

Curb Your Enthusiasm
15 Totally Crazy, Yet Genius 30 Rock Fan Theories 1.1k votes 30 Rock is Tina Fey’s crowning achievement. The show follows the zany life of Liz Lemon, a comedy show producer for NBC, and...
The Best 30 Rock Episodes of All Time 488 votes List of the best 30 Rock episodes, as determined by voters like you. Helmed by modern comedy icon and one of the best SNL pe...
Tracy Jordan Quotes 410 votes The best Tracy Jordan quotes are below and include hilarious sayings by the '30 Rock' character, played by Tracy Morgan. Tra...
The Best 30 Rock Characters of All Time 1.7k votes List of the best 30 Rock characters, with pictures and character bios when available. With such a great cast of characters, ...
What Is The Best Season of 30 Rock? 295 votes List of the best seasons of 30 Rock, ranked from best to worst, with DVD cover images when available. Fans of 30 Rock are ve...
How the Cast of 30 Rock Aged from the First to Last Season 728 views From creating hilarity on TGS to helping each other through relationships, viewers laughed along with the characters of 30 R...
The Most Important Episodes Of '30 Rock' 55 votes Created by and starring Saturday Night Live alum Tiny Fey, 30 Rock parodies Fey's time working on the legendary sketch comed...