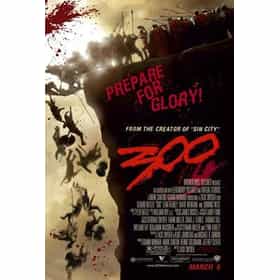 300 is a 2006 American fantasy war film based on the 1998 comic series of the same name by Frank Miller and Lynn Varley. Both are fictionalized retellings of the Battle of Thermopylae which took place between Greece and Persia, within the Persian Wars. The film was directed by Zack Snyder, while Miller served as executive producer and consultant. It was filmed mostly with a super-imposition chroma key technique, to help replicate the imagery of the original comic book. The plot revolves around King Leonidas, who leads 300 Spartans into battle against the Persian "god-King" Xerxes and his invading army of more than 300,000 soldiers. ... more on Wikipedia

This Is Sparta and These Are The Best Quotes From '300' 148 votes Get ready for battle with the best 300 quotes. Based on the graphic novel of the same name by Frank Miller, the film wowed a...

List of All Fantasy Movies Famous Movies Filmed in Canada