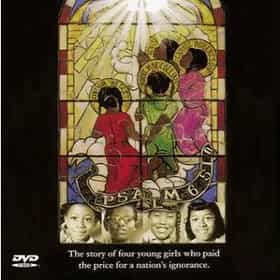 4 Little Girls is a 1997 American historical documentary film about the 15 September 1963 murder of four African-American girls in the 16th Street Baptist Church bombing in Birmingham, Alabama, United States. It was directed by Spike Lee and nominated for an Academy Award for "Best Documentary". The events inspired the 1964 song "Birmingham Sunday" by Richard and Mimi Fariña. The song was used in the opening sequence of the film, as sung by Mimi's sister, Joan Baez. 4 Little Girls premiered Wednesday, June 25, 1997 at the Guild 50th Street Theatre in New York City. It was produced by 40 Acres & A Mule Filmworks, Lee's production company, and Home Box ... more on Wikipedia

4 Little Girls is ranked on...

#122 of 719 People who voted for 4 Little Girls... People in the Northeast are 2x more likely to vote for this are 5x more likely to vote for Madea Franchise on this list The Best Black Movies Ever Made, Ranked 661.2k VOTES The best black movies are favorites that explore African-American culture and themes. This list is ranked by film fans, many...
#526 of 710 The Best Movies Roger Ebert Gave Four Stars 160.4k VOTES List of movies Roger Ebert gave four stars, ranked best to eh. This is NOT a complete list of all of Roger Ebert's four star...
#87 of 140 The Best Movies of 1997 14.4k VOTES A list of the best movies of 1997, from blockbusters like Men in Black to film noirs like L.A. Confidential. The '90s were a...
#193 of 227 The Best Biography Movies 2.2k VOTES A list of all the best biography movies ever made, many of which are streaming on Netflix and Amazon Prime. This biopic movi...
#10 of 38 The Best Movies About Black History 267 VOTES Black history is extremely important in the United States. There are a number of award winning movies about black history th...
#17 of 41 The Best Movies Directed by Spike Lee 1.9k VOTES List of all movies directed by Spike Lee ranked from best to worst with photos. Films directed by Spike Lee are listed here ...

4 Little Girls is also found on...