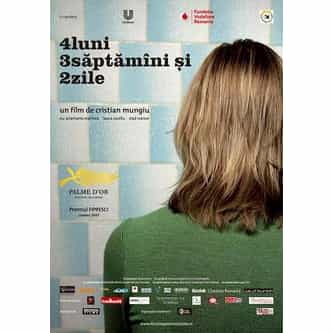 4 Months, 3 Weeks and 2 Days is a 2007 Romanian film written and directed by Cristian Mungiu. It won the Palme d'Or and the FIPRESCI Award at the 2007 Cannes Film Festival. The film is set in Communist Romania in the final years of the Nicolae Ceaușescu era. It tells the story of two students, roommates in the university dormitory, who try to arrange an illegal abortion. After making its worldwide debut at Cannes, the film made its Romanian debut on 1 June 2007, at the Transilvania ... more on Wikipedia