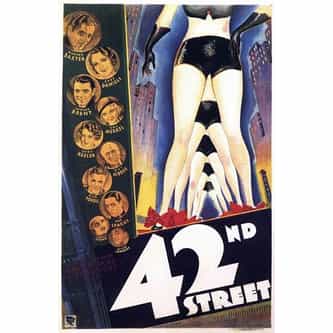 42nd Street is a 1933 American Warner Bros. musical film directed by Lloyd Bacon with choreography by Busby Berkeley. The songs were written by Harry Warren and Al Dubin, and the script was written by Rian James and James Seymour, with Whitney Bolton, from the novel of the same name by Bradford Ropes. The film is a backstage musical, and was very successful at the box office. It is now considered a classic by many. It was nominated for the Academy Award for Best Picture in 1934, and in ... more on Wikipedia

42nd Street IS LISTED ON