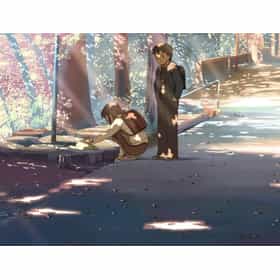 5 Centimeters Per Second is a 2007 Japanese animated feature film by Makoto Shinkai. The film was finished on 22 January 2007. The first part of the film was released on Yahoo! Japan as streaming video to Yahoo! Premium members from 16 to 19 February 2007. On 3 March 2007, the full length featured film had its theatrical premiere at Cinema Rise in Shibuya, Tokyo. The film consists of three segments: Cherry Blossom, Cosmonaut, and 5 Centimeters per Second, totaling about an hour of runtime. As in Shinkai's previous works, Tenmon composes for this film's soundtrack. The DVD was released on 19 July 2007. A novel of 5 Centimeters Per Second has also been released, expanding on the film. In ... more on Wikipedia

5 Centimeters Per Second is ranked on...

#14 of 206 The Saddest Anime Series of All Time 474.2k VOTES Are you looking for sad anime that will make you cry? Well look no further, because for this list we're ranking the saddest ...
#10 of 32 The Best Anime Like Tsukigakirei 306 VOTES Everyone remembers what it was like to get a crush in junior high; everything was so intense and the feelings always just se...
#13 of 14 The 14 Most Tragic Romance Anime 15.4k VOTES Anime is one of the best artistic mediums for romance stories. Between the dramatic storytelling, beautiful art, themat...
#9 of 16 The 13 Bleakest, Most Depressing Anime Ever 28k VOTES Anime has its fair share of heart-wrenching series that leave people in pieces by the final episode, but the depressing...
#11 of 15 The 15 Best Romance Anime Dubs 6.7k VOTES Are you a romance anime fan who prefers to watch your anime dubbed? Or, do you usually watch subbed anime but are looki...
#2 of 11 The 11 Best Makoto Shinkai Movies, Ranked 90 VOTES For the past 40 years, Hayao Miyazaki has long been considered one the greatest anime directors of all time. And even though...
#23 of 1,081 The Best Anime Movies of All Time 118.6k VOTES A list of all the best anime movies ever made, many of which are streaming on Netflix and Amazon Prime. This anime movie lis...
#52 of 61 The Best Movies About Long Distance Relationships 4.6k VOTES There’s a reason that classic stories like William Shakespeare’s Romeo and Juliet appeal to us so much. The thought of not b...
#7 of 23 The 20+ Best Anime That Take Place On Trains 401 VOTES When you really think about it, there are actually a lot of good anime that are about trains in one way or another. Whether ...
#6 of 15 The Best Anime Like 'Clannad: After Story' 551 VOTES CLANNAD: After Story is often cited as one of the greatest romance anime of all time. It's worthy of the distinction. W...
#6 of 13 The 13 Best Anime Like Your Name 566 VOTES Being careful about what you wish for is just one of the beautiful lessons conveyed by the movie Your Name. When two strange...
#22 of 50 The Best Animation Movies of 2007 1.2k VOTES List of the best 2007 animation movies, ranked by how many upvotes they've received by other fans of the genre. Animated mov...

5 Centimeters Per Second is also found on...