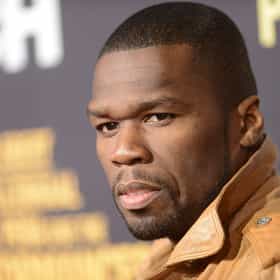 Curtis James Jackson III (born July 6, 1975), known professionally as 50 Cent, is an American rapper, singer, songwriter, actor, television producer, entrepreneur and investor. Born in the South Jamaica neighborhood of the borough of Queens, Jackson began selling drugs at age twelve during the 1980s crack epidemic. He later began pursuing a musical career and in 2000 he produced Power of the Dollar for Columbia Records, but days before the planned release he was shot and the album was never released. In 2002, after Jackson released the compilation album Guess Who's Back?, he was discovered by Eminem and signed to Shady Records, under the aegis of Dr. Dre's Aftermath Entertainment and ... more on Wikipedia

Ice Cube
The Best 50 Cent Songs 4.4k votes List of 50 Cent songs, ranked from best to worst by the Ranker community. All of 50 Cent's singles are included here, but re...
The Best Songs Feat. 50 Cent 2.4k votes These are the best songs featuring 50 Cent. As a solo artist, 50 Cent has won awards (BET Award for Best New Artist), releas...
The Best 50 Cent Movies 3.7k votes This list of the best 50 Cent movies is ranked best to worst with movie trailers when available. 50 Cent successfully transi...
50 Cent & Floyd Maywather’s Feud: A History Of Their Animosity 3.3k views It's a story as old as the hills: two friends become estranged, engage in a volley of disparaging language, and involve othe...
50 Cent Tattoos 1.4k votes 50 Cent tattoos, ranked by fans of the sexy star and of body art. Born Curtis Jackson III, the rapper known worldwide as 50 ...
The Best 50 Cent Albums of All Time 987 votes A pupil of some of the best rappers of all time like Eminem and Dr. Dre, 50 Cent is considered one of the best East Coast ra...
How 50 Cent Ended Up Bankrupt Despite Making Hundreds Of Millions Off Vitaminwater 2.2k views Curtis "50 Cent" Jackson III first rose to fame in 2003 with the release of his debut album, Get Rich or Die Tryin...