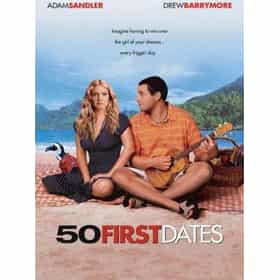 50 First Dates is a 2004 American romantic comedy film directed by Peter Segal and written by George Wing. The film stars Adam Sandler as a lothario veterinarian and Drew Barrymore as an amnesiac, along with Rob Schneider, Sean Astin, Lusia Strus, Blake Clark, and Dan Aykroyd. Most of the film was shot on location in Oahu, Hawaii on the Windward side and the North Shore. Sandler and Barrymore won an MTV award. The fictitious memory impairment suffered by Barrymore's character, Goldfield's Syndrome, is similar to short term memory loss and Anterograde amnesia. There is a 2014 Malayalam movie titled Ormayundo Ee Mukham which is inspired by this movie. ... more on Wikipedia

50 First Dates Isn't Romantic - It's About A Guy Who Takes Advantage Of A Disabled Woman 986 votes Ironically, you may have forgotten about amnesia-themed romantic comedy 50 First Dates, the second in a trio of increasingly...