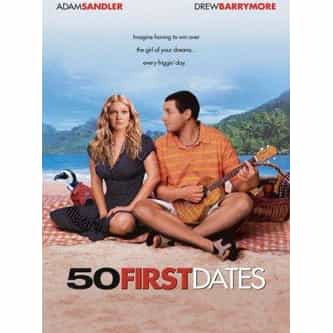 50 First Dates is a 2004 American romantic comedy film directed by Peter Segal and written by George Wing. The film stars Adam Sandler as a lothario veterinarian and Drew Barrymore as an amnesiac, along with Rob Schneider, Sean Astin, Lusia Strus, Blake Clark, and Dan Aykroyd. Most of the film was shot on location in Oahu, Hawaii on the Windward side and the North Shore. Sandler and Barrymore won an MTV award. The fictitious memory impairment suffered by Barrymore's character, Goldfield's ... more on Wikipedia

50 First Dates IS LISTED ON