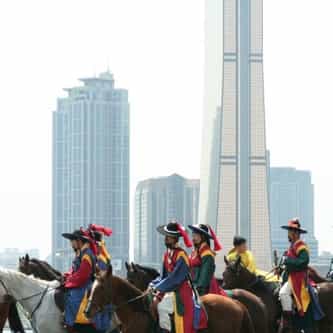 The 63 Building, officially the Hanhwa 63 City, is a skyscraper on Yeouido island, overlooking the Han River in Seoul, South Korea. It was designed by the American architectural firm Skidmore, Owings & Merrill. At 250 meters high, it was the tallest building outside North America when it opened in July 1985, and remains the tallest gold-clad structure in the world. It stood as South Korea's tallest building until the Hyperion Tower surpassed it in 2003, but remained the country's ... more on Wikipedia

63 Building IS LISTED ON

best skylines in the us, best orange soda, great modern architecture, most beautiful places to live in the us, baby names that mean Protector, John Stamos girlfriend, fine leather jackets, largest airports in the us, prisons in west virginia, top 100 trout streams in the us