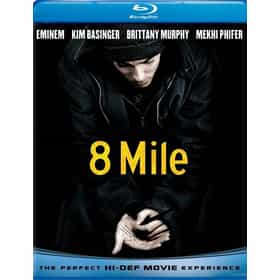 8 Mile is a 2002 American hip-hop biopic film written by Scott Silver, directed by Curtis Hanson, and starring Eminem, Mekhi Phifer, Brittany Murphy, Michael Shannon and Kim Basinger. The film is an account of a young white rapper named Jimmy "B-Rabbit" Smith Jr. living in inner city Detroit, Michigan set in 1995, and his attempt to launch a rap career in a genre dominated by African Americans. The film's title is derived from 8 Mile Road, the highway that runs along the border between Detroit and its predominately white suburbs. Filmed mostly on location in Detroit and its surrounding areas, the film was a critical and financial success. Eminem won the Academy Award for Best ... more on Wikipedia

Behind The Scenes Of ‘Lose Yourself’ And Eminem’s Starring Role In ‘8 Mile’ 2.1k views Prior to 1999, most of the country just knew New York City and Los Angeles as hip-hop epicenters. That all changed in the la...
Here's What The Cast Of "8 Mile" Is Up To And Looks Like 15 Years Later 20.3k views In 2002, Eminem starred in a movie loosely based on his life and 8 Mile quickly became both a commercial and critical succes...
All The Ways 8 Mile Is Radically Different From Eminem's Actual Life 281.1k views 8 Mile is a 2002 drama starring Eminem, loosely based on his life. "Loose" is the operative word here. The film is...