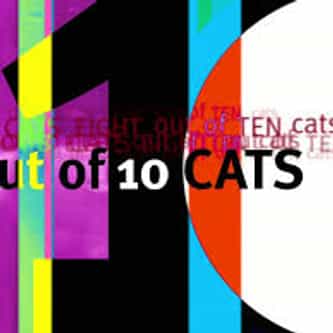 8 Out of 10 Cats is a British television comedy panel game produced by Zeppotron for Channel 4. It was first broadcast on 3 June 2005. The show is hosted by Jimmy Carr and the current team captains are Sean Lock and Jon Richardson. The show is based on statistics and opinion polls, and draws on polls produced by a variety of organisations and new polls commissioned for the programme, carried out by company Harris Poll. The title is derived from a well-known advertising tagline for Whiskas ... more on Wikipedia