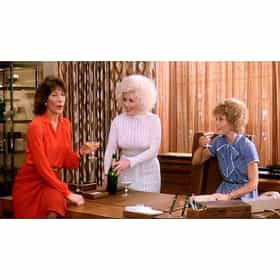 9 to 5 is a 1980 American comedy film written by Patricia Resnick and Colin Higgins, directed by Higgins, and starring Jane Fonda, Lily Tomlin, Dolly Parton, and Dabney Coleman. The film concerns three working women living out their fantasies of getting even with, and their successful overthrow of, the company's autocratic, "sexist, egotistical, lying, hypocritical bigot" boss. 9 to 5 was a hit, grossing over $3.9 million in its opening weekend in the United States and is the 20th highest-grossing comedy film. As a star vehicle for Parton—already established as a successful singer and songwriter—it launched her permanently into mainstream popular culture. Although a ... more on Wikipedia