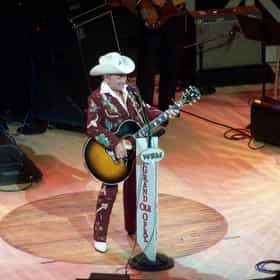 James Cecil Dickens (December 19, 1920 – January 2, 2015), better known by his stage name, Little Jimmy Dickens, was an American country music singer and songwriter famous for his humorous novelty songs, his small size (4'11" [150 cm]), and his rhinestone-studded outfits (which he is given credit for introducing into country music live performances). He started as a member of the Grand Ole Opry in 1948 and was inducted into the Country Music Hall of Fame in 1983. Before his death he was the oldest living member of the Grand Ole Opry. ... more on Wikipedia

'Little' Jimmy Dickens is ranked on...

#239 of 334 The Top Country Artists of All Time 202.4k VOTES One of the most distinct and popular American art forms is country music. The origins of country music began in mostly rural...
#436 of 854 These Poetic Geniuses Wrote Your Favorite Songs of All Time 359.1k VOTES If you ask anyone who has ever tried, it's tough to write one song, nevertheless a batch to be considered a songwriter. Add ...
Famous Shriners Members 54.3k VIEWS List of Famous Shriners ranked by fame and popularity. The Ancient Arabic Order of the Nobles of the Mystic Shrine, known as...
#2 of 17 The Best Country Singers From West Virginia 150 VOTES Here are the best country singers and bands from West Virginia. Country music has firm roots in West Virginia. Although the ...