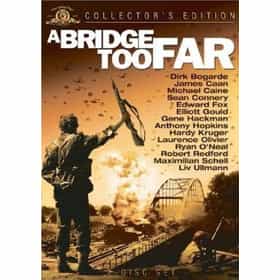 A Bridge Too Far is a 1977 epic film based on the 1974 book of the same name by Cornelius Ryan, adapted by William Goldman. It was produced by Joseph E. Levine and Richard P. Levine and directed by Richard Attenborough. The film tells the story of the failure of Operation Market Garden during WWII, the Allied attempt to break through German lines and seize several bridges in the occupied Netherlands, including one at Arnhem, with the main objective of outflanking German defences in order to end the WWII ... more on Wikipedia

A Bridge Too Far is ranked on...

A Bridge Too Far is also found on...