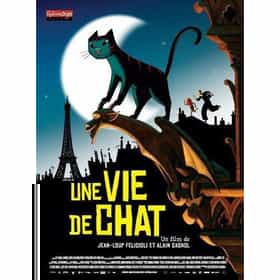 A Cat In Paris

A Cat In Paris is a 2010 animated mystery crime film written by Alain Gagnol and Jacques-Rémy Girerd, directed by Jean-Loup Felicioli and Alain Gagnol. "Dino is a cat who shares his life between two houses. During the day, he lives with Zoé, the only daughter of Jeanne, a police captain. During the night, he clambers over the roofs of Paris in the company of Nico, a very skillful thief. Jeanne is on edge. Not only must she must arrest the cat burglar responsible for numerous jewelry thefts, but she also has to oversee the surveillance of the Colossus of Nairobi, a giant statue coveted by public enemy number one, Victor Costa. The gangster is also responsible for the ... more on Wikipedia

A Cat In Paris is ranked on...

A Cat In Paris is also found on...