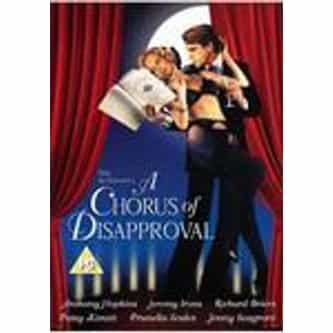 A Chorus of Disapproval

A Chorus of Disapproval is a 1988 British film adapted from the Alan Ayckbourn play of the same title, directed by Michael Winner. Among the movie's cast are Anthony Hopkins, Jeremy Irons, Richard Briers, and Alexandra Pigg. The story follows a young widower, Guy Jones, as he joins an amateur operatic society that is putting on The Beggar's Opera. He rapidly progresses through the ranks to become the male lead, while simultaneously conducting liaisons with several of the female cast. ... more on Wikipedia

A Chorus of Disapproval IS LISTED ON