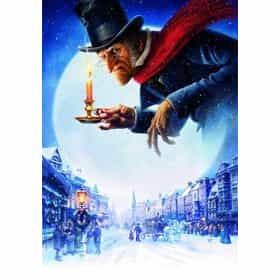 Disney's A Christmas Carol is a 2009 American 3D computer animated motion-capture holiday fantasy drama film written and directed by Robert Zemeckis. It is an adaptation of the Charles Dickens story of the same name and stars Jim Carrey in a multitude of roles, including Ebenezer Scrooge as a young, middle-aged, and old man, and the three ghosts who haunt Scrooge. The film also features supporting roles done by Gary Oldman, Colin Firth, Bob Hoskins, Robin Wright Penn, and Cary Elwes. The 3D film was produced through the process of motion capture, a technique Zemeckis previously used in his films The Polar Express, and Beowulf. A Christmas Carol began filming in February 2008, and was ... more on Wikipedia

A Christmas Carol is ranked on...

A Christmas Carol is also found on...