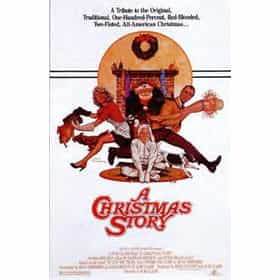 A Christmas Story is a 1983 American Christmas comedy film based on the short stories and semi-fictional anecdotes of author and raconteur Jean Shepherd, based on his book In God We Trust: All Others Pay Cash, with some elements derived from Wanda Hickey's Night of Golden Memories. It was directed by Bob Clark. The film has since become a holiday classic and is shown numerous times on television during the Christmas season, usually on the networks owned by Turner Broadcasting. Since 1997, a A Christmas Story marathon has aired on either TNT or TBS, comprising twelve consecutive airings of the film and beginning at 8 pm on Christmas Eve. The film earned director Clark two Genie Awards. ... more on Wikipedia

A Christmas Story is ranked on...

A Christmas Story is also found on...