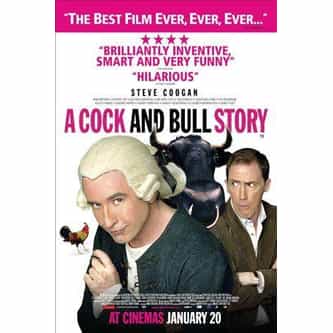 Tagline
He's About To Play The Role Of His Life.

A Cock and Bull Story

This film is a 2005 British comedy film directed by Michael Winterbottom. It is a film-within-a-film, featuring Steve Coogan and Rob Brydon playing themselves as egotistical actors during the making of a screen adaptation of Laurence Sterne's 18th century metafictional novel Tristram Shandy. Gillian Anderson and Keeley Hawes also play themselves in addition to their Tristram Shandy roles. ... more on Wikipedia

A Cock and Bull Story IS LISTED ON