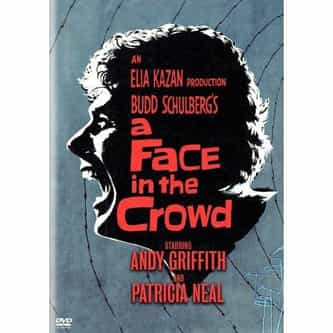 A Face in the Crowd

A Face in the Crowd is a 1957 film starring Andy Griffith, Patricia Neal and Walter Matthau, directed by Elia Kazan. The screenplay was written by Budd Schulberg, based on his short story "Your Arkansas Traveler", part of his 1953 short story collection, Some Faces in the Crowd. The story centers on a drifter named Larry "Lonesome" Rhodes, who is discovered by the producer of a small-market radio program in rural northeast Arkansas. Rhodes ultimately rises to great fame ... more on Wikipedia

A Face in the Crowd IS LISTED ON