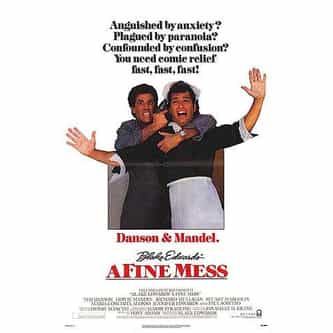 A Fine Mess is a 1986 comedy film written and directed by Blake Edwards and starring Ted Danson and Howie Mandel. The film was intended as a remake of Laurel & Hardy's classic short "The Music Box" and was to be semi-improvised in the same style as the director's earlier comedy, The Party, but studio interference, poor previews and subsequent re-editing resulted in the film becoming a fully scripted chase comedy with very little of the original ideas for the film remaining ... more on Wikipedia

A Fine Mess IS LISTED ON