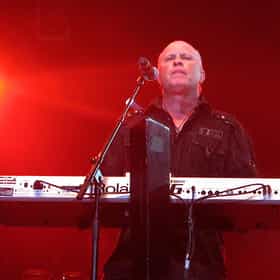 A Flock of Seagulls are an English new wave and synth-pop band originally formed in 1980 in Liverpool by Michael "Mike" Score (lead vocals, keyboards), his brother Alister "Ali" James Score (drums), and Francis Lee "Frank" Maudsley (bass), with their most famous line-up consisting of the Score brothers, Maudsley, and lead guitarist Paul Reynolds. The group had a string of international hit singles including "I Ran (So Far Away)" (1982), "Space Age Love Song" (1982), "Wishing (If I Had a Photograph of You)" (1982), and "The More You Live, the More You Love" (1984). They first became notable in the 1980s for their ... more on Wikipedia

lists about A Flock of Seagulls

A Flock of Seagulls is ranked on...

#198 of 465 The Best Current Pop Groups/Singers 463k VOTES A list of the best current pop groups and singers who are making some of the best pop songs of 2019. The battle between...
#435 of 2,219 The Best Rock Bands of All Time 3.2M VOTES There are thousands of rock bands that have existed throughout the decades ever since the dawn of rock and roll, but only th...
#236 of 350 People who voted for A Flock of Seagulls... People in the Northeast are 2x more likely to vote for this The Worst Rock Bands of All Time 707.9k VOTES Here they are: the absolute worst rock bands in history, ranked from the most awful bands to the kind of okay but still pret...
#120 of 505 The Greatest Musical Artists of the '80s 550.8k VOTES   The greatest and most prolific artists of music's most colorful decade are remembered on this list. This list is ba...
#392 of 1,071 The Worst Bands of All Time 1.3M VOTES The worst bands in music history, ranked by music fans (and haters.) This list contains the most awful bands to listen to fr...
#37 of 329 The Best Bands With Animal Names 32.3k VOTES The best bands with animals in their names criss-cross the music world with offerings from music genres like indie rock, cla...
#174 of 383 The Best Pop Artists of the 1980s 370k VOTES The 1980s was a huge decade in terms of breaking pop stars. 80s artists benefited from the rising popularity of cable televi...
#5 of 50 The Best Bands Named After Birds 1.7k VOTES Bands get their names in all kinds of ways. But when it comes to bands named after birds, you might be surprised at how many...
#6 of 18 Bands That Sound Nothing Like Their Name 616 VOTES Have you ever been really intrigued by a band with a great name, only to be super disappointed when you hear their music? Or...
#24 of 36 The Best Bands Named After Songs and Albums 406 VOTES A variety of different bands have taken their names from other songs or albums. Bands named after songs represent virtually ...
#14 of 117 The Best New Romantic Bands/Artists 8.6k VOTES Though the New Romantic movement rose and fell relatively quickly in terms of time, but that doesn't mean there weren't a nu...
#87 of 322 People who voted for A Flock of Seagulls... also upvote Star Trek Franchise on The Greatest Sci-Fi Movies of All Time The Best Pop Rock Bands & Artists 1G VOTES Over the years, pop rock has come to dominate the radio waves. Mixing a catchy pop sound with light (read: not serious) lyri...
#110 of 540 The Greatest Pop Groups & Artists of All Time 584.5k VOTES For years, pop music has dominated your radio dial. No matter where you listen, there's no doubt that pop music bands and po...
#23 of 374 The Best New Wave Bands 93k VOTES This New Wave bands list ranks the best New Wave groups and musicians by votes. This list of top New Wave artists let’s yo...
#11 of 311 The Best Electronic Bands & Artists 14.3k VOTES With the growth of electronic dance music, it's easy to forget that there's a separate genre called electronic music. Not al...
#19 of 153 The Best Synthpop Bands & Artists 20.9k VOTES Over the past few decades, synthpop has become known as one of the most quirky and fun genres of pop music. Originating in t...
#12 of 78 The Best Synth Rock Bands/Artists 3.4k VOTES Synth rock, also known to many as electro rock and electronic rock, is one of the most popular genres of rock to emerge in t...

A Flock of Seagulls is also found on...