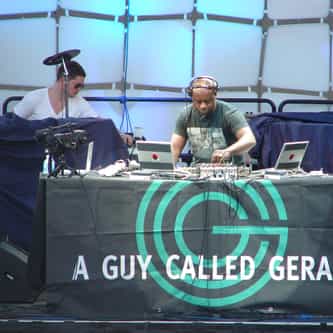 Gerald Simpson (born 16 February 1967), better known as A Guy Called Gerald, is a British DJ, record producer and musician. He was an early member of 808 State, and later achieved success as a solo artist. He is best known for his early work in the Manchester acid house scene in the late 1980s and the track "Voodoo Ray". His style developed during the early 1990s, and his 1995 album Black Secret Technology would become a "much-touted candidate for 'best jungle album ever.' ... more on Wikipedia

A Guy Called Gerald IS LISTED ON