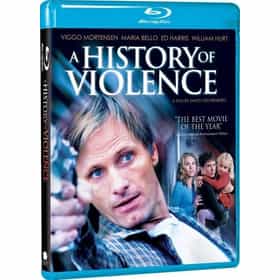 This film is a 2005 American thriller film directed by David Cronenberg and written by Josh Olson. It is an adaptation of the 1997 graphic novel of the same name by John Wagner and Vince Locke. The film stars Viggo Mortensen as the owner of a small-town diner who is thrust into the spotlight after taking out two wrong doers in self-defense, thus forcing him to confront his past. The film was in the main competition for the 2005 Palme d'Or. The film was put into limited release in the United States on September 23, 2005, and wide release on September 30, 2005. ... more on Wikipedia

A History of Violence is ranked on...

#157 of 254 The Best Psychological Thrillers of All Time 470.4k VOTES A list of the best psychological thrillers of all time, ranked by fans who may or may not be trying to mess with your head! ...
#688 of 1,699 The Most Rewatchable Movies 3.4M VOTES There are some movies that I always stop at and watch if I see them on TV or I can put in the DVD player and watch when I'm ...
#76 of 165 The Greatest Comic Book Movies of All Time 190k VOTES This list of the best comic book movies ever, is ranked by fans of both comics and movies and needs your votes as well! This...
#171 of 265 The Best Ensemble Movies 17.1k VOTES The best ensemble movies feature an incredibly talented cast of actors and actresses, so much so that the cast overshadows e...
#10 of 158 The Best Movies of 2005 10.5k VOTES A list of the best movies of 2005, from action movies like Mr. and Mrs. Smith to dramas like Jarhead. The '00s were a decade...
#65 of 544 The Best Movies of the 2000s 70.9k VOTES List of the best films released between the years 2000 and 2009, the era frequently referred to as the '00s or the "aug...
#47 of 59 The Very Best New Noir Movies 2.2k VOTES When you think "noir," you're likely to conjure images of movies from the 1940s. But plenty of newer films put the...
#21 of 38 The Best Movies About Brothers 518 VOTES There’s nothing like the bond between siblings; sometimes our siblings become our closest friends in life because they simpl...
#17 of 38 The Best Movies Based on DC Comics 11.8k VOTES A list of DC Comics movies. These are films based on DC comics such as Batman, Superman, and Green Lantern, characters that ...
#8 of 71 The Best William Hurt Movies 1.9k VOTES List of the best William Hurt movies, ranked best to worst with movie trailers when available. William Hurt's highest grossi...
#4 of 50 The Best Thriller Movies of 2005 396 VOTES List of the best 2005 thriller movies, ranked by how many upvotes they've received by other fans of the genre. These thrille...
#5 of 60 The Best Indiana Movies 232 VOTES Which of these movies about Indiana are the best? It's time to vote up the best movies set in the Hoosier State. Some of the...
#1 of 51 The Best R-Rated Marriage Drama Movies 334 VOTES Here is a list of R-Rated marriage drama movies, ranked from best to worst with movie trailers when available. This list tak...
Movies That Gave Kids False Hope Their Divorced Parents Would Get Back Together 6.1k VIEWS Movies about divorce can take many forms. They can, for instance, be about splits-as-poignant-but-absolutely-final&nbsp...

A History of Violence is also found on...