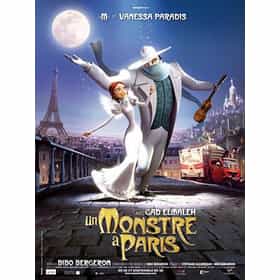 A Monster in Paris

A Monster in Paris is a 2011 French 3D computer-animated musical comedy fantasy adventure film directed by Bibo Bergeron, produced by Luc Besson, written by Stéphane Kazandjian, distributed by EuropaCorp Distribution, features the voices of Sean Lennon, Vanessa Paradis, Adam Goldberg, Danny Huston, Madeline Zima, Matthew Géczy, Jay Harrington, Catherine O'Hara, and Bob Balaban and based on a story he wrote. Some aspects of the film are based on Gaston Leroux's novel The Phantom of the Opera. It was released on 12 October 2011. It was also produced by Bibo Films, France 3 Cinéma, Walking The Dog, uFilm, uFund, Canal+, France Télévisions, ... more on Wikipedia

A Monster in Paris is ranked on...

#100 of 103 The Best Halloween Movies for Kids 29.7k VOTES Halloween movies for kids include some holiday classics and some newer films that are quickly becoming classics. The best Ha...
#19 of 48 The Best French Comedy Movies 1k VOTES The French aren't usually known for their sense of humor, but this list of the best French comedy movies proves that the Fre...
#33 of 51 The Best Catherine O'Hara Movies 632 VOTES List of the best Catherine O'Hara movies, ranked best to worst with movie trailers when available. Catherine O'Hara's highes...

A Monster in Paris is also found on...