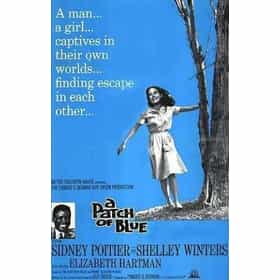 A Patch of Blue

A Patch of Blue is a 1965 American drama film directed by Guy Green about the relationship between a black man, Gordon, and a blind white female teenager, Selina, and the problems that plague their relationship when they fall in love in a racially divided America. Made in 1965 against the backdrop of the growing civil rights movement, the film explores racism from the perspective of "love is blind." Shelley Winters won the Academy Award for Best Supporting Actress, her second win for the award, following her victory in 1959 for The Diary of Anne Frank. It was also the final screen appearance for veteran actor Wallace Ford. Scenes of Poitier and Hartman kissing were excised ... more on Wikipedia

A Patch of Blue is ranked on...

A Patch of Blue is also found on...