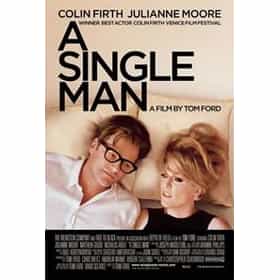 A Single Man is a 2009 American drama film based on the novel of the same name by Christopher Isherwood. It is directed by Tom Ford in his directorial debut and stars Colin Firth, who was nominated for an Academy Award for Best Actor for his portrayal of George Falconer, a depressed gay British university professor living in Southern California in 1962. The film premiered on September 11, 2009 at the 66th Venice International Film Festival, and went on the film festival circuit. After it screened at the 34th Toronto International Film Festival, The Weinstein Company picked it up for distribution in the United States and Germany. An initial limited run in the United States commenced on ... more on Wikipedia

A Single Man is ranked on...

A Single Man is also found on...