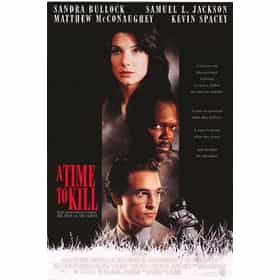 This film is a 1996 drama film adaptation of John Grisham's 1989 novel of the same name, directed by Joel Schumacher. Matthew McConaughey, Sandra Bullock, Samuel L. Jackson, and Kevin Spacey star, with Oliver Platt, Ashley Judd, Kiefer and Donald Sutherland, and Patrick McGoohan appearing in supporting roles. Set in Canton, Mississippi, the film involves a young girl and an involving plot. The film was a critical and commercial success, making nearly $150 million at the U.S. box office. ... more on Wikipedia

A Time to Kill is ranked on...

A Time to Kill is also found on...