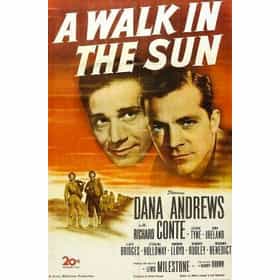 A Walk in the Sun

A Walk in the Sun is a World War II war film released in 1945, based on the novel by Harry Brown, who was a writer for Yank, the Army Weekly based in England. The book was serialized in Liberty Magazine in October 1944. The film was directed by Lewis Milestone, stars Dana Andrews and features Richard Conte, George Tyne, John Ireland, Lloyd Bridges, Sterling Holloway, Norman Lloyd, Herbert Rudley and Richard Benedict, with narration by Burgess Meredith. ... more on Wikipedia

A Walk in the Sun is also found on...