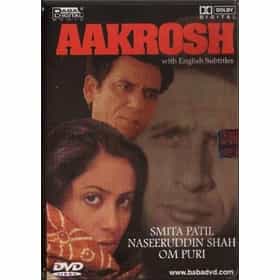 Aakrosh is a 1980 Hindi arthouse film directed by auteur Govind Nihalani and written by renowned Marathi playwright Vijay Tendulkar. The film starred Naseeruddin Shah, Om Puri and Amrish Puri in lead roles and went to win 1980 National Film Award for Best Feature Film in Hindi and several Filmfare Awards. It won the 'Golden Peacock' for the Best Film at the International Film Festival of India. This was the debut film of Nihalani, who went on to be known for his dark and frighteningly real depictions of human angst in other landmark alternative movies such as Ardh Satya and Tamas. It is in the list of 60 films that shaped the Indian film industry spanning six decades. ... more on Wikipedia

Aakrosh is ranked on...

Aakrosh is also found on...