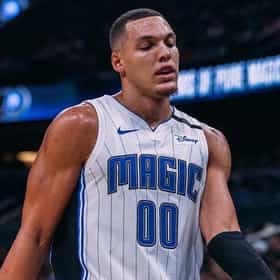 Aaron Addison Gordon (born September 16, 1995) is an American professional basketball player for the Orlando Magic of the National Basketball Association (NBA). He played one year of college basketball for the University of Arizona before being selected by the Magic with the fourth overall pick in the 2014 NBA draft. In 2016, he was a part of a memorable Slam Dunk Contest in which he lost in a close matchup to Zach LaVine. On July 6, 2018, Gordon re-signed with the Magic. In the Magic's season opener on October 17, Gordon had 26 points and 16 rebounds in a 104–101 win over the Miami Heat. ... more on Wikipedia

Aaron Gordon is ranked on...

Aaron Gordon is also found on...