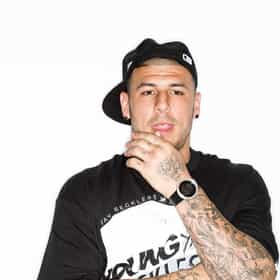 Aaron Josef Hernandez (November 6, 1989 – April 19, 2017) was an American football tight end in the National Football League (NFL) and convicted murderer. A productive player during his three seasons with the New England Patriots, his career came to an abrupt end after his arrest and conviction for the murder of Odin Lloyd. Recognized as an All-American at the University of Florida, Hernandez was drafted by the Patriots in the fourth round of the 2010 NFL Draft. Alongside teammate Rob Gronkowski, he formed one of the league's most dominant tight-end duos, becoming the first pair of tight ends to score at least five touchdowns each in consecutive seasons for the same team. He made one ... more on Wikipedia

Aaron Hernandez is ranked on...

#403 of 530 Annoying Celebrities Who Should Just Go Away Already 1.2M VOTES The most annoying celebrities, ranked by entertainment fans themselves. These annoying celebs are obnoxious, overexposed, ...
#30 of 57 The Best College Football Tight Ends of All Time 3.4k VOTES American college football, like all football originated as rugby in England and Canada. Eventually rugby came stateside, and...
#143 of 255 The All Time Ugliest Athletes 90.8k VOTES The all-time ugliest athletes prove once and for all that there is no connection between beauty and athletic ability. These ...
#4 of 62 The Most Controversial Athletes in Sports History 14.4k VOTES Sports stars are one part celebrity, one part athlete. Like so many celebrities, some sports stars are prone to scandal. The...
#10 of 16 The 16 Most Heartbreaking Patriots Moments of All Time 1.4k VOTES One of the most consistent franchises in all of sports over since the mid 1990s, the New England Patriots and their fans hav...
#3 of 20 NFL Players with the Worst Tattoos 11.1k VOTES The NFL has always been known as a league where players can display their personalities in a number of different ways. Tatto...
#28 of 30 Sports Stars Who You Would Break Out of Jail 2.9k VOTES This is a list of sports stars you would help break out of jail. For many sports fans, seeing their favorite star athlete se...
18 High-Profile Athletes Who Lost Endorsements 56.4k VIEWS Despite their tremendous strength, speed, agility, and finesse, athletes are just like the rest of us; they eat, breath...
The Biggest Flash-In-The-Pan Athletes And What They're Up To Now 2.1k VIEWS Joel Embiid's rookie season sparked a heated debate in the sports world about whether or not an athlete could be worthy...
25+ Former NFL Players With CTE 261 VIEWS One of the biggest clouds hanging over the NFL in recent years has been the growing specter of head injuries, concussions, a...
What Happens to Disgraced Athletes? 22 Stories of Life After Scandal 12.7k VIEWS People of all ages and backgrounds look up to athletes as people who applied themselves to a goal and managed to turn their ...
#37 of 38 The Best Hispanic Football Players 4k VOTES A list of the best Hispanic football players. Hispanic football players, though some understated, have been an important par...
25 Professional Athletes Who Died Young 59.7k VIEWS Several famous baseball players, NFL athletes, and basketball stars have died much too young. Some of these sports stars tha...
Famous People Whose Last Name Is Hernandez 3.2k VIEWS Being a fairly common name, it's no surprise there are a lot of famous people with the last name Hernandez. Do you recognize...
Celebrity Arrests 2013: Celebrities Arrested in 2013 124.9k VIEWS Which celebrity arrests in 2013 were the most scandalous? As the year unfolded, the inevitable happened: The rich and famous...

Aaron Hernandez is also found on...