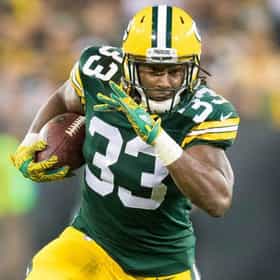 Aaron LaRae Jones (born December 2, 1994) is an American football running back for the Green Bay Packers of the National Football League (NFL). He played college football at the University of Texas at El Paso. Jones attended and played high school football for Burges High School in El Paso, Texas. He had a three-star composite rating from 247Sports.com. Jones attended and played college football for the UTEP Miners from 2013–2016 under head coach Sean Kugler. As a freshman, Jones played in nine games. In his collegiate debut, against New Mexico, he had 11 carries for 127 yards and two rushing touchdowns. On October 26, against Rice, he had a season-high 186 rushing yards. Overall, he ... more on Wikipedia

Aaron Jones is ranked on...

#22 of 31 The Best NFL Running Backs of the 2010s 3.6k VOTES These are the best running backs of the 2010s. Running backs are some of the most respected players in the NFL and they've e...
#156 of 200 The All-Around Best Athletes of 2018 34.4k VOTES When it comes to being an all-around best athlete, you're not just talking about the leading scorers of all time, or th...
#12 of 58 Who Is the Best Running Back in the NFL Right Now? 59.2k VOTES Using a combination of speed, strength, and agility, NFL running backs must carry the football through elite defenses. ...
#93 of 276 The Best Green Bay Packers Of All Time 85.6k VOTES This is a list of the best Green Bay Packers of all time. The Pack. The Green and Gold. These are names associated with one ...