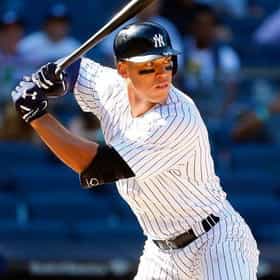 Aaron James Judge (born April 26, 1992) is an American professional baseball outfielder for the New York Yankees of Major League Baseball (MLB). Judge was unanimously selected as the American League (AL) Rookie of the Year in 2017 and finished second for AL Most Valuable Player. Judge, who played college baseball for the Fresno State Bulldogs, was selected by the Yankees in the first round of the 2013 MLB draft. After making his major league debut in 2016 and hitting a home run in his first career at bat, Judge went on to have a record-breaking rookie season in 2017. He was named an All-Star and won the Home Run Derby, becoming the first rookie to do so. Judge ended the season with 52 ... more on Wikipedia

Aaron Judge is ranked on...

#251 of 620 The Greatest Baseball Players Of All Time 515.9k VOTES This greatest baseball players list represents the combined lists of baseball fans everywhere. Anyone can make their own lis...
#25 of 286 The Top Current Baseball Players 219.5k VOTES Who do you think should make the list of the best current players in baseball? Ranked by fans, critics, and sports analysts,...
#640 of 710 The Best Hitters in Baseball History 270.1k VOTES The best hitters in baseball history are those who hold the all-time hitting records in Major League Baseball, change the ga...
#48 of 157 The Greatest New York Yankees of All Time 120.8k VOTES These are the greatest Yankees of all-time, voted on by Yankees fans who really know who the best Yankees players of all tim...
#89 of 255 The All Time Ugliest Athletes 90.9k VOTES The all-time ugliest athletes prove once and for all that there is no connection between beauty and athletic ability. These ...
#1 of 34 All The Tallest Current Baseball Players, Ranked 1k VOTES The tallest players in baseball right now are proving that you don’t have to fit the typical mold of an MLB player throughou...
#11 of 30 Every MLB Player To Hit 50 Home Runs In A Season 455 VOTES Every baseball player to hit 50 home runs in a season has accomplished a special feat. Whether natural or aided by performan...
#187 of 202 The All-Around Best Athletes of 2018 32.9k VOTES When it comes to being an all-around best athlete, you're not just talking about the leading scorers of all time, or th...
#23 of 50 The 50 Most Valuable MLB Players For Fantasy Baseball In 2019 4.1k VOTES Opening Day 2019 is around the corner, and while MLB managers focus on setting their roster and choosing an opening day...
#72 of 76 The Things Everyone (Including You) Googled in 2017 6.3k VOTES A look through the most searched terms in 2017 offers a fun glimpse into the cultural zeitgeist and review of the bigge...
#4 of 50 Who Will Win The 2020 American League MVP Award? 712 VOTES While everyone in baseball wants to win a World Series, the best players in the league will all be competing for the 20...
#13 of 32 The Most Impressive Home Run Derby Performances Of All Time 178 VOTES The MLB Home Run Derby is one of the most beloved events of the year for any baseball fan. All Home Run Derby winners have c...
#11 of 125 The Best Current MLB Hitters 20.9k VOTES Whether you're working on your fantasy baseball roster or simply staying updated with the 2018 MLB rankings, ...
#3 of 35 The Best Black Baseball Players Right Now 254 VOTES The best black baseball players right now are part of a shrinking minority in the sport. The number of black professional ba...