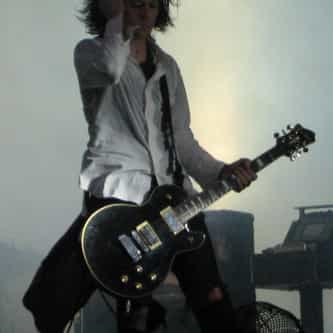 Aaron Wright North (born March 22, 1979) is an American musician. He was the co-founder and guitarist of punk band The Icarus Line, the lead guitarist of industrial rock group Nine Inch Nails, and vocalist/guitarist for Jubilee. North is noted for his chaotic and unconventional guitar approach, his use and command of feedback, and the flailing of his guitar wildly while on stage. His reputation for being outspoken both on and off the stage resulted in equal criticism and praise from fans ... more on Wikipedia

Aaron North IS LISTED ON