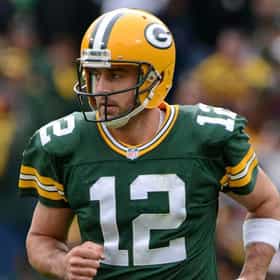 Aaron Charles Rodgers (born December 2, 1983) is an American football quarterback for the Green Bay Packers of the National Football League (NFL). Rodgers played college football for the California Golden Bears, where he set several career passing records, including lowest single-season and career interception rates. He was selected in the first round of the 2005 NFL Draft by the Packers.After backing up Brett Favre for the first three years of his NFL career, Rodgers became the Packers' starting quarterback in 2008. In 2010, he led them to a victory in Super Bowl XLV over the Pittsburgh Steelers, earning the Super Bowl MVP. He was named Associated Press Athlete of the Year in 2011, ... more on Wikipedia

Aaron Rodgers Loves And Hookups 107k views Who is Aaron Rodgers dating? Many famous women have dated Aaron Rodgers, and this list will give you more details about thes...

Aaron Rodgers is ranked on...

Aaron Rodgers is also found on...