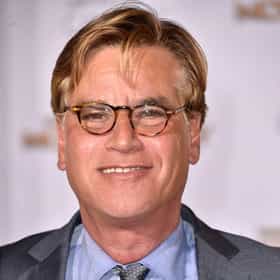 Aaron Benjamin Sorkin (born June 9, 1961) is an American screenwriter, director, producer, and playwright. His works include the Broadway plays A Few Good Men, The Farnsworth Invention and To Kill a Mockingbird; the television series Sports Night, The West Wing, Studio 60 on the Sunset Strip, and The Newsroom; and the films A Few Good Men, The American President, Charlie Wilson's War, Moneyball, and Steve Jobs. For writing The Social Network, he won the Academy Award for Best Adapted Screenplay, among other awards. He made his feature directorial debut in 2017 with Molly's Game, which he also wrote. Sorkin's trademark rapid-fire dialogue and extended monologues are complemented, in ... more on Wikipedia

Aaron Sorkin is ranked on...

#107 of 152 Celebrities Hollywood Forced on Us 216.2k VOTES What is it with Hollywood trying its hardest to shove certain actors down everyone's throats? Now, more than ever, there are...
#75 of 182 The Greatest Playwrights in History 34.8k VOTES List of the best playwrights ever that span all time periods and issues in the plays that they wrote. Well known playwrights...
#49 of 50 The Biggest Oscar Snubs of 2018 7k VOTES Academy Award snubs are par for the course when it comes to Oscar season. As what constitutes a snub is somewhat subjective,...
Famous People Named Aaron 25.5k VIEWS List of famous people named Aaron, along with photos. How many celebrities named Aaron can you think of? The famous Aarons b...
Celebrities Who Are Pro-Israel 73.8k VIEWS Pro-Israel celebrities range from veteran film actors to musicians to comedians. All have publicly supported Israel, signing...

Aaron Sorkin is also found on...