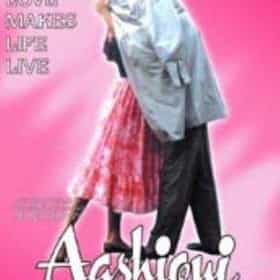 Aashiqui is a 1990 Bollywood romantic musical drama film. It was commercially and critically successful particularly because of its music. Even today the film's songs and music are as popular as it was then. The film made the careers of singer Kumar Sanu and composers Nadeem-Shravan. The soundtrack album has been rated the 4th best ever by Planet Bollywood on their "100 Greatest Bollywood Soundtracks".According to Filmy Keeday Each and every song is pleasing and fits well in the film according to the story". Aashiqui 2, with a completely new theme, directed by Mohit Suri with Aditya Roy Kapur and Shraddha Kapoor, was released on 26 April 2013. ... more on Wikipedia

Aashiqui is ranked on...

Aashiqui is also found on...

Romance Movies and Films List of All Movies Released in 1990