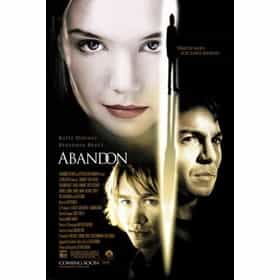 Abandon is a 2002 American thriller film released by Paramount Pictures and Touchstone Pictures. It was written and directed by Stephen Gaghan, starring Katie Holmes as a college student whose boyfriend disappeared two years previously. Despite being set at an American university, much of the movie was filmed in Canada at McGill University's McConnell Hall. It is based on the book Adams Fall by Sean Desmond. The book was re-titled Abandon for the movie tie-in paperback printing. ... more on Wikipedia

Abandon is ranked on...

Abandon is also found on...