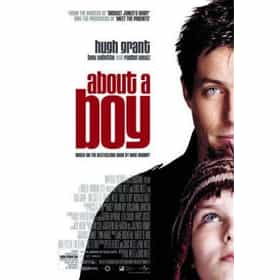 About a Boy is a 2002 British-American comedy-drama film co-written and directed by brothers Chris Weitz and Paul Weitz. It is an adaptation of the 1998 novel of the same name by Nick Hornby. The film stars Hugh Grant, Nicholas Hoult, Toni Collette, and Rachel Weisz. The film at times uses double voice-over narration, when the audience hears both Will's and Marcus's thoughts. It was nominated for an Academy Award for Best Adapted Screenplay. Actors Hugh Grant and Toni Collette were nominated for a Golden Globe and a BAFTA Award respectively for their performances. ... more on Wikipedia

About a Boy is ranked on...

#807 of 1,699 The Most Rewatchable Movies 3.4M VOTES There are some movies that I always stop at and watch if I see them on TV or I can put in the DVD player and watch when I'm ...
#328 of 672 The Most Overrated Movies of All Time 734.1k VOTES The most overrated movies of all time in one list, ranked in order of how overrated they really are. Being overrated doesn't...
#222 of 410 The Best Rainy Day Movies 176.6k VOTES For many, rainy days are no fun—but it doesn't have to be that way. A great way to spend such days is watching movies, ...
#6 of 16 Pretty Good Rom-Coms On Netflix To Watch With Someone Who Hates Rom-Coms 516 VOTES Sometimes you're in the mood for a good rom-com, but your partner just isn't. Hard as it is to believe, some people are&nbsp...
#34 of 176 The Best Movies of 2002 13.3k VOTES A list of the best movies of 2002, from dramas like Road to Perdition to cult classics like Adaptation. The '00s were a deca...
#23 of 37 The Best Single Mom Movies 2.7k VOTES This list contains information about single mom movies, ranked from best to worst by user votes. The best single mom movies ...
#13 of 23 What to Watch If You Love Parenthood 439 VOTES Ah, Parenthood. Why did that show ever have to end? If you’ve just finished all six seasons and you’re already missing the B...
#23 of 25 Toast The New Year With The Top New Year's Eve Movie Scenes 603 VOTES The top New Year's Eve movie scenes include moments from some of the top films of all time and is a fun cinematic look at th...
#190 of 465 The Best Feel-Good Movies 436.6k VOTES Want to feel warm and fuzzy inside? This is a ranked list of the best feel-good movies that make us experience all the good ...
#58 of 158 The Best Comedy-Drama Movies 10.6k VOTES A list of over 100 of the best comedy-drama movies ever made, many of which are currently streaming on Netflix and Am...
#136 of 204 The Best PG-13 Comedies of All Time 83.5k VOTES Here is the list of PG-13 comedies, ranked from best to worst. These comedies are all rated PG-13, so if you're looking for ...
#104 of 210 The Best Romance Movies Rated PG-13 18.1k VOTES List of PG-13 romance movies, ranked from best to worst with movie trailers when available. Top romance movies can take us o...
#27 of 36 The Best Movies for Empaths to Watch 572 VOTES On occasion, you just need to watch a movie that hits you right in the feels. For sensitive people, there are plenty of grea...
#22 of 35 The Greatest Guilty Pleasure Romance Movies 942 VOTES Is there anything more indulgently delightful than cheesy romance movies? Whether you buy into the corny sentiments in ...
#24 of 27 The Best Movies With Kids Swearing 204 VOTES Having child actors swearing in movies is always good for a laugh. That's why it is time to determine the best movies with k...
#2 of 44 The Best Hugh Grant Movies 6.3k VOTES This is a list of the best Hugh Grant movies, ranked best to worst - with movie trailers when available. Hugh Grant has been...
#6 of 38 The Best Toni Collette Movies 842 VOTES List of the best Toni Collette movies, ranked best to worst with movie trailers when available. Toni Collette's highest gros...
#3 of 27 The Best Comedy Movies Set in London 136 VOTES The British are known for their sense of humor, so it's no surprise that there are many comedy movies based in London on thi...
#18 of 21 What to Watch If You Love Jane the Virgin 812 VOTES Looking for more TV shows like Jane the Virgin? Who could blame you? The hit comedy series first aired in 2014 and has ...
#6 of 32 The Best Romance Movies of 2002 422 VOTES List of the best 2002 romance movies, ranked by how many upvotes they've received by other fans of the genre. If watching me...
#11 of 28 The Best Romantic Movies Set in London 147 VOTES Romance might not be the first thing that comes to mind when you think of the city, but there have been some classic romanti...
#1 of 7 The Best Movies Based On Nick Hornby Books 20 VOTES Nick Hornby movies always seem to have the perfect blend of comedy and drama. The British novelist has had seven of his book...

About a Boy is also found on...