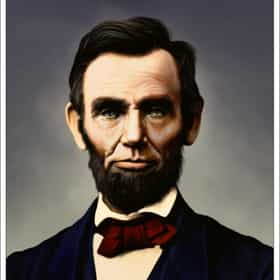 Abraham Lincoln (February 12, 1809 – April 15, 1865) was an American statesman and lawyer who served as the 16th president of the United States from 1861 until his assassination in April 1865. Lincoln led the nation through the American Civil War, its bloodiest war and its greatest moral, constitutional, and political crisis. He preserved the Union, abolished slavery, strengthened the federal government, and modernized the U.S. economy. Born in Kentucky, Lincoln grew up on the frontier in a poor family. Self-educated, he became a lawyer, Whig Party leader, Illinois state legislator and Congressman. In 1849, he left government to resume his law practice, but angered by the success of ... more on Wikipedia

Abraham Lincoln is ranked on...

Abraham Lincoln is also found on...