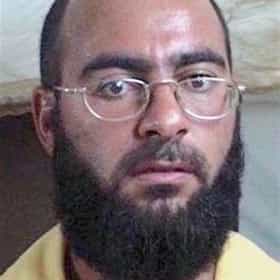 Abu Bakr al-Baghdadi or Abu Du'a, alternatively called Abu Bakr al-Baghdadi al-Husseini al-Qurashi and known to his supporters as Amir al-Mu'minin or Caliph Ibrahim, is the leader of the Islamic State of Iraq and the Levant, an Islamic extremist group in western Iraq and Syria, self-styled as the "Islamic State". It is believed that he has been proclaimed by his followers to be a Caliph. On 4 October 2011, the U.S. State Department listed al-Baghdadi as a Specially Designated Global Terrorist, and announced a reward of up to US$10 million for information leading to his capture or death. Only the leader of al-Qaeda, Ayman al-Zawahiri, merits a larger reward. ... more on Wikipedia

Abu Bakr al-Baghdadi is ranked on...

#10 of 868 Celebrity Death Pool 2016 370.1k VOTES Celebrity death pool 2016: Here's a large list of celebrities we think just might die this year. The only certainties in l...
#52 of 52 Who Should Be TIME Magazine's Person of the Year 2015? 9.9k VOTES TIME magazine is currently polling for who should be its Person of the Year in 2015, with a wide selection of world lea...
#3 of 30 Real World Avengers Villains 5.2k VOTES The Avengers are used to assembled to battle every major threat facing the Marvel Universe. What about our universe, though?...
Famous People Named Abu 363 VIEWS Who knew there were so many famous people named Abu in the world? Our list of celebrities named Abu includes pictures and ...