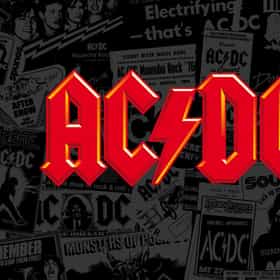 AC/DC are an Australian hard rock band, formed in November 1973 by brothers Malcolm and Angus Young, who continued as members until Malcolm's illness and departure in 2014. Commonly referred to as a hard rock or blues rock band, they are also considered pioneers of heavy metal and are sometimes classified as such, though they have always dubbed their music as simply "rock and roll". AC/DC underwent several line-up changes before releasing their first album, High Voltage, on 17 February 1975; Malcolm and Angus were the only original members left in the band. ... more on Wikipedia

The Best AC/DC Songs of All Time 22.2k votes List of the top AC/DC songs, as voted on by fans like you. With demonic undertones and a hard rock sound, AC/DC is the quint...
AC/DC Albums, Ranked Best to Worst 9.6k votes AC/DC is among the most iconic bands in rock and roll history. The ultimate garage band, they have achieved a status few ban...
Insane Stories From The Heyday Of AC/DC 278k views In the annals of rock history, there are hundreds of legendary stories from some of the biggest bands to ever have graced th...
Every Single AC/DC Song With The Word 'Rock' In The Title, Ranked 1.9k votes If there's one thing that AC/DC has been crystal clear about over their 40 year career it's that they like to rock. A lot. A...

#19 of 505 The Greatest Musical Artists of the '80s 561.3k VOTES   The greatest and most prolific artists of music's most colorful decade are remembered on this list. This list is ba...
#880 of 1,076 The Worst Bands & Musicians of All Time 1.3M VOTES The worst bands in music history, ranked by music fans (and haters.) This list contains the most awful bands to listen to fr...
#7 of 2,218 People who voted for AC/DC... also upvote Indiana Jones Franchise on The Best Movies of All Time also upvote The Terminator Franchise on The Best Movies of All Time The Best Rock Bands of All Time 3.2M VOTES There are thousands of rock bands that have existed throughout the decades ever since the dawn of rock and roll, but only th...
#19 of 126 Bands Or Artists With Five Great Albums 24.5k VOTES Building a successful band is tough but keeping it going is much tougher. Even some of history's biggest, best-selling ...
#43 of 411 The Greatest Musical Artists of the '90s 1M VOTES   Take a big whiff- "mmmbop", it smells like the '90s in here! An incredibly eclectic decade for music, the...
#10 of 381 The Best Pop Artists of the 1980s 376.9k VOTES The 1980s was a huge decade in terms of breaking pop stars. 80s artists benefited from the rising popularity of cable televi...
#5 of 632 The Greatest Live Bands of All Time 330.1k VOTES List of the greatest live bands or artists of all time, created and ranked by music fans worldwide asks the question "w...
#23 of 279 Rank the Rock N Roll Hall of Fame Inductees 304k VOTES A complete list of bands and artists inducted into the Rock and Roll Hall of Fame, ranked in order of preference by music fa...
#5 of 23 The Best Band Name Origins Stories 4.6k VOTES List of best band name origin stories, crowd-sourced and ranked by a community of music-lovers. Bands are known to find insp...
#7 of 101 The Best Musical Groups Featuring Brothers, Ranked 1.5k VOTES Here are the greatest bands and groups featuring brothers. The family that plays together stays together. A lot of bands hav...
#5 of 76 The Greatest Rock Band Logos of All Time 51.9k VOTES Picking the best band logos of all time turned out to be quite a task. When asking people about their favorite band logos, m...
#5 of 88 Acts You'd Like To See As The Super Bowl Half Time Show 23.5k VOTES Musical acts Maroon 5, Travis Scott, and Big Bio are the most recent performers to agree to tackle the Super Bowl halftime s...
#1 of 41 The Best Bands for Drowning Out Noise Around You 1.7k VOTES Your coworkers are great. So are the strangers at your local coffee shop. But sometimes you just want some peace and quiet. ...
#1 of 324 The Best Australian Bands, Ranked 164k VOTES Who are the best Australian bands? The best bands from Australia you'll find on this list come from a variety of different m...
#49 of 324 The Best Pop Rock Bands & Artists 1G VOTES Over the years, pop rock has come to dominate the radio waves. Mixing a catchy pop sound with light (read: not serious) lyri...
#11 of 101 The Best Classic Metal Bands 16k VOTES When heavy metal first emerged at the beginning of the 1970s, naysayers would have never suspected that the bands from those...
#2 of 211 The Best Hard Rock Bands/Artists 195.3k VOTES Hard rock is a genre that started with bands like Cream, Mountain, Steppenwolf, and Grand Funk in the late 1960s and early 1...
10 Famous Rock Bands That Were Struck By Horrifying & Violent Tragedies 279.7k VIEWS Sometimes being in a band isn't all it's cracked up to be. Just ask these bands, all of which suffered terrible fates. ...
16 Famous Bands Whose Members Died Tragically and How They Handled It 64k VIEWS How do bands go on after a core member dies, especially at the very height of their fame? Every group handles band memb...
20 Legendary Artists Who Overcame Critical Bashing 16.4k VIEWS They say hindsight is 20/20, and nowhere is this more apparent than in the world of music criticism. Time and again, greats ...