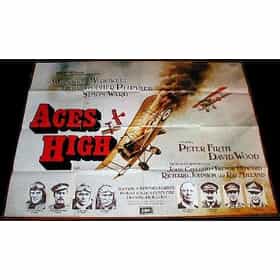 Aces High is a 1976 British-French war film directed by Jack Gold and starring Malcolm McDowell, Peter Firth, Christopher Plummer and Simon Ward. The screenplay was written by Howard Barker. As acknowledged in the opening credits, the film is based on the 1930s play Journey's End by R. C. Sherriff with additional material from the memoir Sagittarius Rising by Cecil Lewis. The film moves the action from the trenches to the Royal Flying Corps. However, many characters are very recognisable. It tells the story of a Royal Flying Corps squadron in the First World War during one week of battle, where the high death rate of pilots puts an enormous strain on those remaining. ... more on Wikipedia

Aces High is ranked on...

Aces High is also found on...