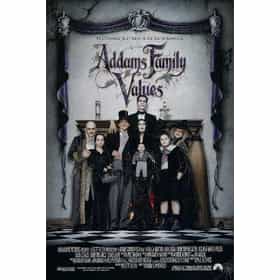 Addams Family Values is a 1993 American dark comedy film, which is the sequel to the 1991 American film The Addams Family. It was written by Paul Rudnick and directed by Barry Sonnenfeld, and features many cast members from the original, including Raúl Juliá, Anjelica Huston, Christopher Lloyd, Carel Struycken, Jimmy Workman, Christina Ricci, Joan Cusack, David Krumholtz, and Christopher Hart. Compared to its predecessor, which retained something of the madcap approach of the 1960s sitcom, Values is played more for macabre laughs. ... more on Wikipedia

Hidden Details In The ‘Addams Family’ Movies You May Have Missed 9.7k votes The Addams Family movies are an Easter egg hunter's dream. Not only do they include references to the comic strips of Charle...
The Most Messed Up Things That Happen In The 'Addams Family' Movies 842 votes They're creepy, they're kooky, they're altogether ooky, and they’re also the stars of the strangest '90s films. Everyone who...
Dark And Morbidly Funny Behind-The-Scenes Stories From The '90s Addams Family Films 229.8k views If you were a kid in the ‘90s, then Barry Sonnenfeld’s Addams Family films were probably rays of moonlight in your life. Whe...

Addams Family Values is ranked on...