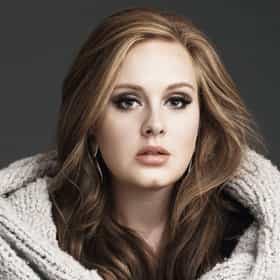 Adele Laurie Blue Adkins (; born 5 May 1988) is an English singer-songwriter. After graduating from the BRIT School in 2006, Adele signed a recording contract with XL Recordings. In 2007, she received the Brit Awards Critics' Choice award and won the BBC Sound of 2008 poll. Her debut album, 19, was released in 2008 to commercial and critical success. It is certified eight times platinum in the UK, and three times platinum in the US. The album contains her first song, "Hometown Glory", written when she was 16, which is based on her home suburb of West Norwood in London. An appearance she made on Saturday Night Live in late 2008, boosted her career in the US. At the 51st Grammy ... more on Wikipedia

Fun Facts You Didn't Know About Adele 860.1k views Think you know everything there is to know about your English power house singer? Well it's time to put your knowledge to th...
The Best Adele Music Videos 328 votes Adele official music videos as found on MTV, VH1 and YouTube. All Adele music videos are listed from most popular to least. ...
The Best Adele Albums, Ranked 163 votes We're ranking the best Adele albums of all time. One of the best English pop singers ever, Adele's discography features 15 G...

Adele is ranked on...

Adele is also found on...