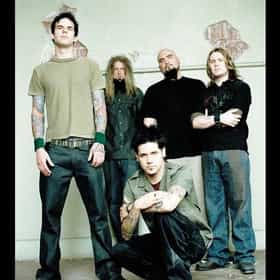 Adema is a nu metal band from Bakersfield, California. The band formed in 2000 with members lead vocalist Mark Chavez, vocalist/guitarist Tim Fluckey, guitarist Mike Ransom, bassist Dave DeRoo, and drummer Kris Kohls. After their first two albums, Adema, and Unstable, the band was plagued with years of conflict and lineup changes. Ransom left the band in 2003 followed by Chavez later in 2004 due to conflicts between themselves and other members of the band. Luke Caraccioli replaced Chavez in early 2005 for one album, Planets, but then left a few months later in late 2005. Vocalist Bobby Reeves and guitarist Ed Farris, both from the band Level, were recruited to join as well, but only ... more on Wikipedia

Adema is ranked on...

#35 of 40 The Best Bands Like Linkin Park 1.3k VOTES Looking for more bands like Linkin Park? The Agoura Hills-based rock band took the nu metal genre to its absolute peak with ...
#43 of 361 People who voted for Adema... are 7x more likely to vote for Korn on this list are 4x more likely to vote for Mudvayne on this list The Best Nu Metal Bands 88.4k VOTES Nu metal artists list, with photos, ranked best to worst by votes. List of good nu metal bands includes a filter so you can ...
#88 of 119 The Best Post-Grunge Band 10.8k VOTES After the grunge boom of the early 1990s, there were a slew of bands that emerged following that initial movement. The bands...

Adema is also found on...