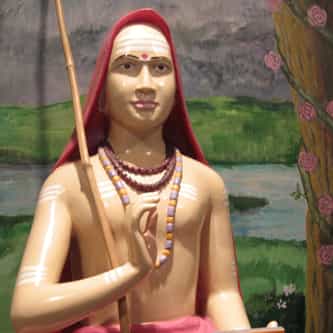 Adi Shankaracharya (Sanskrit: आदि शङ्कराआचार्य [aːdɪ ɕɐŋkɐɽɐ]) was an early 8th century Indian philosopher and theologian who consolidated the doctrine of Advaita Vedanta. He is credited with unifying and establishing the main currents of thought in Hinduism.His works in Sanskrit discuss the unity of the ātman and Nirguna Brahman "brahman without attributes". He wrote copious commentaries on the Vedic canon (Brahma Sutras, Principal Upanishads and Bhagavad Gita) in support of his ... more on Wikipedia