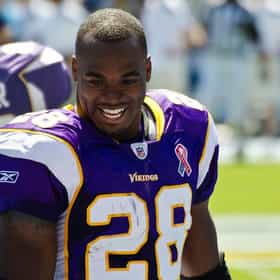 Adrian Lewis Peterson (born March 21, 1985) is an American football running back for the Washington Redskins of the National Football League (NFL). He played college football at Oklahoma and was drafted by the Minnesota Vikings seventh overall in the 2007 NFL Draft. Peterson set the NCAA freshman rushing record with 1,925 yards as a true freshman during the 2004 season. As a unanimous first-team All-American, he became the first freshman to finish as the runner-up in the Heisman Trophy balloting. Peterson finished his college football career as the Sooners' third all-time leading rusher. Following his first professional season, in which he set an NFL record for most rushing yards in a ... more on Wikipedia

Adrian Peterson is ranked on...

Adrian Peterson is also found on...